20th Anniversary of Xiamen Special Administrative Region-2019 Macao, Humanity Intangible Cultural Heritage and Booth at the International Exhibition of Ancient Art.
Promotion activities will be held at the Japan booth with the aim of expanding the sales channels of Japanese sake and Japanese rice from local Japanese restaurants.

At the venue, a tasting and tasting booth will be set up in the Japan Pavilion to promote Japanese rice and sake.
During the exhibition, a sushi demonstration will be held at the Japanese rice booth. 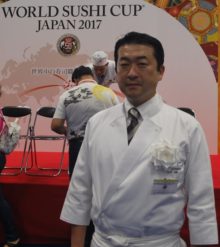 After graduating from Osaka Abeno Mochi Cooking College in 1991, she lived and trained at a long-established store in Tokyo. After that, he studied at many sushi restaurants.
Opened Ogawa Sushi in Tokyo in 2003.
To spread the safe and delicious Japanese sushi culture to the whole world, I will go on the way as a sushi instructor.
International Sushi Knowledge Certification Association [Director / Secretary General]
Nationwide Sushi Knowledge Overseas Certification System Committee [Certified Lecturer]
Appointed by the Ministry of Agriculture, Forestry and Fisheries
Chiba Sushi Commercial Life Sanitation Association [Standing Director / Technical Chairperson]

He has been engaged in the sake business for many years at the Hong Kong branch of a major brewing company, and in 1017 he established Shu Gen Washuya Limited.
He speaks Japanese fluently and serves as a bridge between Japan and Hong Kong and is committed to promoting sake and Japanese food.

● Tony will explain the product features, basic knowledge of Japanese sake, and pairing with dishes to the participants at the “Special Dinner Event with Sake Sommelier” held on December 20th from 18:00. Strive to expand the number of sake fans.